During my visit to St. Armand’s Circle this past weekend, my parents and I were surprised to spot a new Mexican restaurant in the area.  Interested, we decided to give it a shot a few hours after visiting Tommy Bahama. The outside of the restaurant only says Mexican restaurant, we learned the name of the restaurant when we sat at the bar which had a Budweiser sign glowing with the restaurant name: La Malinche.  The bartender greeted us and informed us it was his first day. We soon found out why he was previously unemployed.

My parents and I decided to order some tacos and some drinks. I decided to have the Tacos al Pastor which consists of 4 tacos filled with marinated pork, onions, and pineapples with cilantro and onions on the side ($12.95). The tacos come with rice. The bartender had a comment for every step of our order and was completely passive-aggressive towards the party throughout the meal. The food came out lightning quick, we did not wait for longer than five minutes for our food and it was warm.

I was surprised with how great the tacos were. The tortillas tasted freshly made and the pork was seasoned perfectly. The pineapples were a great pair for the pork with the cilantro and onions. The rice tasted like canned rice as did the beans we ordered on the side, however the overall taste of the meal was great. After we received our food things took a turn for the worst.

The entire restaurant ran out of Coca-Cola (which everyone in my party was drinking – either in a mixed alcoholic beverage or as regular soda). Instead of the bartender offering anything else to drink, he simply went on his way and when questioned about the drinks only replied that they were searching other restaurants for soda donations. We had some salsa chips at our table which combined with salty Mexican food made lacking a beverage just uncomfortable.

I finally grabbed the attention of the bartender and asked him if they had anymore horchata. He had no clue what that was and brought me a liquor menu. In the middle of this conversation, a waitress approached us with some tacos looking for whose they were. The bartender leaped for joy because he was hungry and this was his. He then grabbed his food and marched to the back, completely ignoring the fact that I was in the middle of asking for a drink. When he came back to the bar he pretended like it never happened.

Luckily, another employee eventually grabbed me something to drink since apparently this bartender had no intentions of doing his job  and now I know why the majority of the Foursquare tips and Urbanspoon reviews for this restaurant denounce the service here. What I found to be particularly funny was that the restaurant itself has reviewed itself on Urbanspoon four times with stellar reviews each time. They aren’t shy, their username is even “La Malinche”. How blatant. 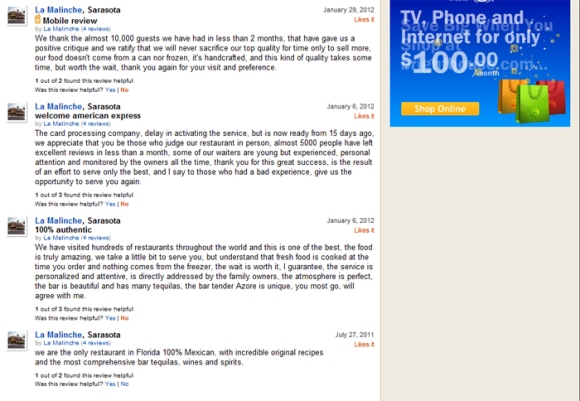 After this service debacle, I doubt I will ever return to La Malinche and if I ever did it would most certainly be a takeout order. The high prices certainly don’t reflect the quality of the service. The restaurant has almost been in the circle for a year so I think it’s time for them to fix this issue. It’s really a shame because the food there is great, if only they could hire better employees and have better management.

What the HECK?? Are you serious? That service is completely insane to me! It is kind of funny, though, about the Urbanspoon reviews lol. My boyfriend and I just tried J. Baja’s on Bruce B Downs by Peabody’s and it was so good! That mexican restaurant is worth it!

Yeah haha I thought it was interesting because normally a restaurant that will try to review itself tries to hide its identity, but this restaurant didn’t see anything wrong with calling themselves the best Mexican restaurant in Florida and touting “thousands” of reviewers lol. I really want to try J. Baja’s – my friends uncle is actually the founder of that restaurant. I’ll try it sometime 🙂