This is a guest blog written by Emanuel – a friend from USF who is studying abroad with me in Seoul, South Korea. He participated in the Chois’ Tacos Burrito Challenge and made it to the semi-finals. Chois’ Tacos has been in making tacos and burritos in Sinchon for years.

Me and Carlos go way back. At least three months. Maybe even more.

Actually, we met at a Christmas party a few years ago, and hadn’t realized that we were both coming to Korea until a month or two in advance of our leaving. We recognized each other in one of the orientations where they tell you not to commit grand larceny and not to inappropriately touch the locals, and knew we were in for a treat.

Fast forward a few months to a brisk night in Seoul, South Korea.

As we rounded another street corner, coming closer for the destination for that night, Chois’ Tacos alongside one of the main commerce streets in Sinchon, I reflected on our coincidental visit to Korea, and how it ended up in a group of international students walking to an eating contest preliminary. Of all the things to do in South Korea, stuffing your face full of burrito at an alarmingly gluttonous rate was not exactly on the travel brochure. I don’t think it’s on any brochure, actually.

So we get to the burrito joint, and the owner, Chois, is already making burritos for two entrants who are to go just before us. The deal is this: eat an entire large burrito in two minutes or less, and it’s free. Place in the top 15 of qualifiers, and you’re invited to the prestigious contest that Sunday. A a quick glance at the board showed a slew of names recognized for their triumphant efforts – thirty or so names below the two minute barrier, etched in permanent marker for all eternity. Or until the ink wears out. Whichever comes first. 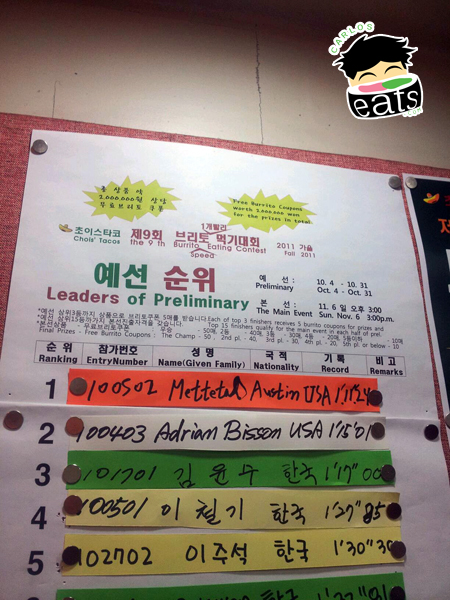 Among the names, at the very top, laid Someone Somebodicus from the USA. I can’t remember his name, but that was probably it. Clocked in at 1:11, his herculean effort was recognized as the quickest time set. We joked about his American origins, and after a few fat jokes from the Europeans in the group, realized that we’d be lucky to break two minutes and get our free burrito, let alone put Somebodicus in his place.

The two Korean entrants had just finished at a rapid pace of about two and a half minutes. Their red, strained, and painfully taut faces reconciled the pain me and the other entrants were about to endure. For sure, we wouldn’t be able to break two minutes. Some of us began to falter and wonder if competing was even worth it – after all, if you’re going to buy a burrito, you may as well enjoy it.

No one chickened out, however. We all took our seats, paid our respects to the pile of meat, cheese, and random assortment of vegetables wrapped in tortilla in front of us, and grabbed them like the hungry, angry, and determined men that we were. I took a sip of water to wet my gullet, put on my serious face, and brought the burrito to my mouth. The gaping maw of despair and darkness that is my mouth readied for the imminent feast. “Forgive me lord, for I realize not the tortuous and disgusting things I will wrought upon this innocent burrito. I am but only a hapless man.” I thought to myself. 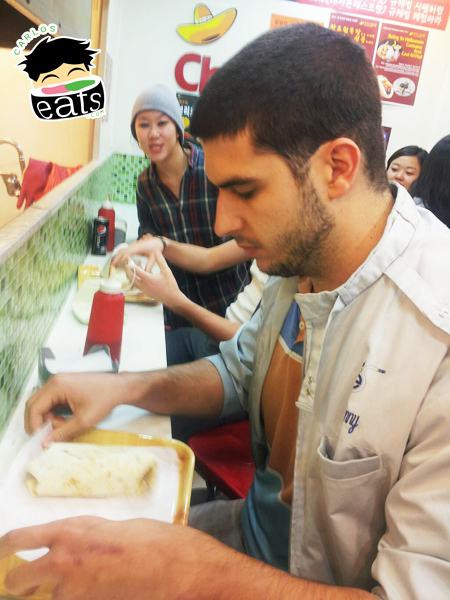 I was not going to pay for this burrito, even if it killed me. I may enjoy eating, but I largely enjoy not paying for things even more. And I also forgot my wallet. I took a deep breath, looked at Mr. Chois as he readied the stopwatch, and reminded myself that obviously, placing in the top 15 was impossible, but if I had to pay for this burrito, I’d surely be tired from all the running from Mr. Chois, because he did look like a nimble fellow. 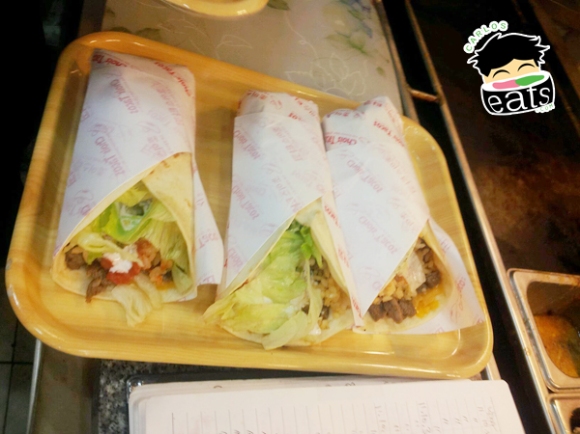 He said go, and I shoved the burrito in my face. Bite by bite, I slid the bits of cooked flesh and assorted plants down my throat at an alarming rate. Something took hold of me, and I became a burrito eating demon. I don’t remember much from the actual feast, but when I came out of my crazed haze of hunger and darkness, all I remember was cheering. And before I knew it, my hands were empty, my mouth half full, and as I swallowed the last bit, I shouted “Chois’ Taco!” and my time was set.

One minute, and twelve seconds.

Not only had I broken the two minute barrier for my free burrito, I’d placed second in the preliminary, guaranteeing my seat in the competition on Sunday, as well as a complimentary five free burritos for my performance.

It was, without a doubt, the happiest day of my life. 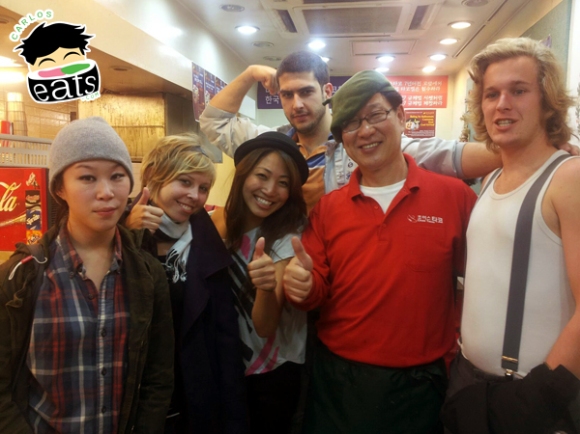 The burrito was good. It was hearty. It was delicious. It was all a man could ask for. Well proportioned, cooked to serve right in front of you, and in a lovely little shop by the street, at a reasonable price at around $5.5 USD. The steak used was actually cooked perfectly, even if it was going to just be shoved into my face at seventy six miles an hour, which leads me to believe that it’s probably even more scrumptious when the chef knows the eater will probably get to take their time and enjoy it.

Directions: Take the subway, 2 line/Green line, to Sinchon Station. Go out exit number 3 and head towards Yonsei University. At the first intersection with a traffic light turn right. After about 100 meters, Chois’ Tacos will be on your right.Phone Number:Website: