Big Belly Burgers is a local restaurant chain in Tampa Bay. There is one in Bartow and one in Brandon. They are most famous for their Big Belly Burger Challenge: a challenge where you have 20 minutes to eat a 1 lb. fully topped burger and 1lb. of french fries. Should you succeed, your photo is taken and put up in the restaurant and you also receive a t-shirt. As an avid Man vs. Food watcher, I decided to take this challenge on Monday. 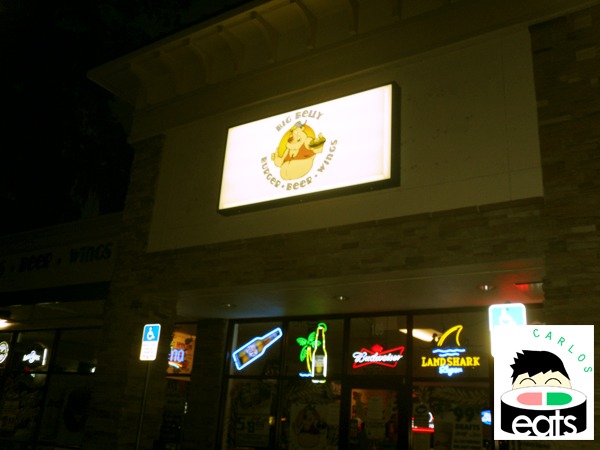 A plain exterior, I don’t know how I feel about their logo. Burger places must have a hard time designing them (I feel the same about Burger Monger).

When I walked in they told me I could seat myself. I found a table in the middle of the dining room. Many people eating there appeared to be regulars and when I told the waitress I wanted to order the Big Belly Burger Challenge all eyes turned on me. Feeling a little nervous…I looked to the waitress for some reassurance, but she told me she believed in me. What a cool waitress!

I waited about twenty to thirty minutes for my burger. While waiting I observed the restaurant. It has dim lighting and the crowds are mostly families and groups of friends, almost has a pub-like atmosphere. The 99 center drafts must attract lots of people there. They have a variety of burgers and also plenty of kids menu choices too. The restaurant is two open rooms and you can easily look at other people dining there. 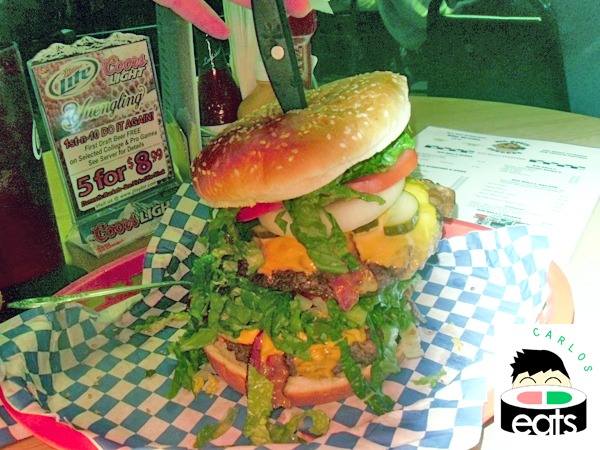 The burger finally arrived and it was a monster. Tons of beef, tomatoes, bacon, pickles, onions, and lettuce. I had to start immediately after receiving the burger (that’s why the picture isn’t so clear). The only way to fit this burger into my mouth was to disassemble then put it back together in edible portions. The burger was initially very tasteful, but a little dry. The bun was nice and soft. Veggies tasted fresh. I think the burger would probably benefit from some sauce added on top. I had to keep dipping it in ketchup. I think trying one of their regular burgers in the future is in order. 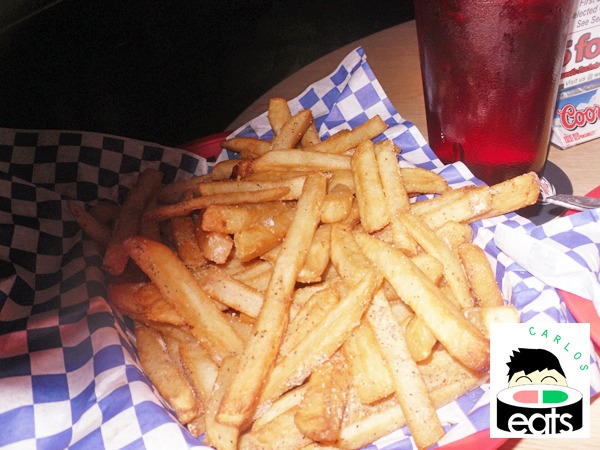 The french fries were pretty salty (as pictured) and made me want to drink more water. I tried to resist so I could avoid filling myself up on drinks. They were big fries and not really too great, despite seasoning I didn’t like them too much.

Time started to slip away and before I knew it I had only four minutes left on the clock. I was starting to feel dizzy from having too much beef and not enough to drink or time to process it. I finished all the meat and the bun, but I had a bunch of large onions and pickles leftover that I couldn’t finish. I finished most of the fries, but couldn’t get to the bottom without exploding. So I sadly failed the challenge. I could have probably finished the rest of the toppings, but finishing the fries was too much.

The crowd was really cool and trying to give me encouragement to finish it. This probably wasn’t one of the best burgers I have the tasted, but the challenge made it a fun experience. The challenge isn’t cheap $14.99 (probably to keep people from wasting food and to pay for the shirts). I’d like to see someone else finish this challenge though. If any of you guys finish it make sure you let me know, I’ll plug you.

No clue how the Man vs. Food eats all that he does. He certainly has a gift.