Full disclosure: I was invited to attend Filipino Taco Tuesday with Chef Eric Pascual in Berekley, California. I was offered two tickets to the dinner in exchange for my opinion. These opinions are my own and do not represent Chef Eric Pascual or any affiliates.

Taco Tuesday is one of my favorite food celebrations that has been popularized in the 21st century. You might have a rough Monday and there are still a few days to go until the weekend and then Taco Tuesday comes in to save the week. Tacos, margaritas, and beer is always nice in my book.

Chef Eric Pascual and I have been connected online for a few years since he spent time in Tampa Bay in the past and followed me on social media. I actively watched the Filipino Food Movement in California and New York for years from Florida and saw him as a part of that movement.

Recently, Chef Eric Pascual relocated over to Berkeley to host his regular pop-ups and is starting over in a new part of California. He invited me to come check out one of his dinners for an article and I was more than happy to attend. The Filipino Taco Tuesday presents an appetizer, salad, numerous Filipino-inspired tacos, and dessert. His pop-ups are BYOW (Bring-Your-Own-Wine) for those who want to bring their own libations.

The evening started with lumpia. Both chicken and veggie were available and made well with a slightly spicy vinegar dip. The lumpia rolls were served on sharing platters for guests as a warm-up to the tacos.

I enjoyed my lumpia with a Modelo beer which was a nice pairing. 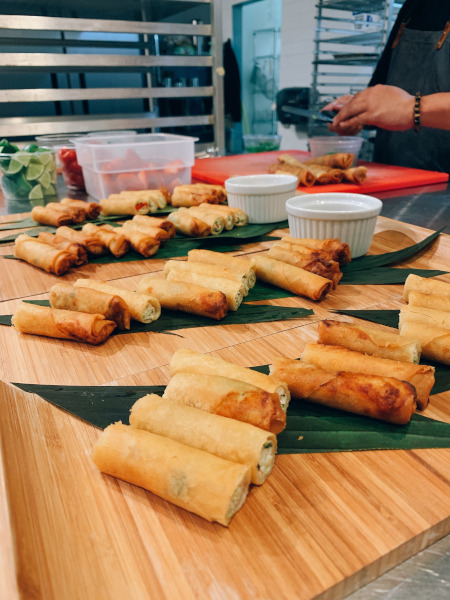 When it comes to lumpia, I judge a roll based on how packed the rolls are and how crispy the outside of the lumpia is without being too fried. Sometimes the problem with lumpia is dirty oil at restaurants that is being reused. Not the case at this dinner.

The ingredients inside should be quality or you will most certainly taste it in every bite due to the wrapper not being as thick as an eggroll. I was happy with these lumpia rolls and felt like it was a good starter. 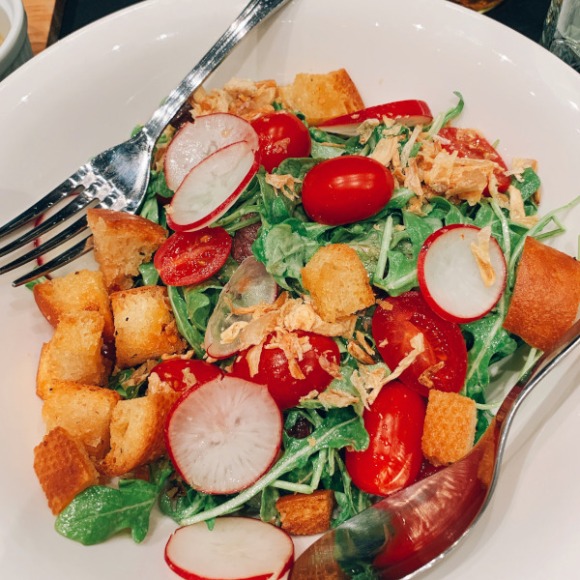 Between courses a salad was prepared with organic greens, radishes, calamansi/sesame viaigrette, coconut/garlic croutons. Plenty of arugula greens were in the salad, which I enjoyed.

The first taco was a Salmon Belly Sisig Taco. Sisig is one of my favorite Filipino foods and is usually made of pieces of pig ear on a sizzling platter, sometimes with an egg on-top. The Salmon Belly version took some elements of sisig and swapped it out for a salmon interpretation with tomato salsa, diced onions, peppers, and cilantro.

There was so many things going on in this taco that I couldn’t fully appreciate the salmon belly itself. In a way it reminded me a little of salmon sinigang. The taco was enjoyable, but not what I expected when reading the name of the taco on the menu.

Next up was the Chicken Adobo Taco. Chicken Adobo is the national dish of the Philippines and there are probably over 10,000+ recipes on how to prepare the dish since there are so many islands and tribes in the Philippines. It is one of the most difficult dishes to please a diner with due to all the variations.

This taco features vinegar, Tamari, garlic, bay leaves, peppercorn, tomato salsa, diced onions, and cilantro. I expected a more soy-sauce heavy taste in this taco that was actually not too apparent here, maybe due to the Tamari use for gluten-free diners instead of soy sauce.  It reminded me more of a home-cooked chicken that my guest and I could both relate too. Delicious, but not what I expected. 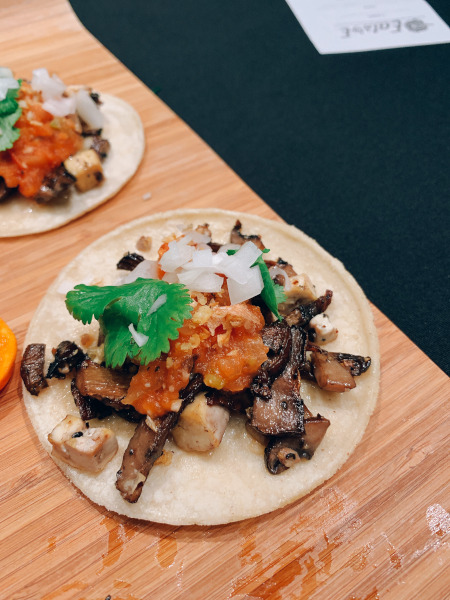 The third taco was a Veggie Taco with roasted tofu and mushrooms topped off with roasted tomato salsa, diced onions, and cilantro. This taco was really interesting and a nice middle of the way dish. I really liked the mushrooms, and am a huge fan of mushrooms in general.

After the veggie taco the Braised Bistek Taco came out and this taco was truly the star taco of the night. The taste of Filipino Bistek was very apparent and the meat was very tender and flavorful with plenty of calamansi, garlic, tamari, black pepper, sauteed onions, tomato salsa, and cilantro.

I would order this taco all night long. It was my favorite dish of the evening until a surprise dish was added to the menu.

Chef Eric added a Kare-Kare Tostada to the menu made with organic peanut butter, bagoong shrimp paste, and 5-hour braised oxtail cooked in chicken stock. This was by far my favorite dish of the night and should certainly be added to the regular line-up of Chef Eric’s dinners.

The taste of the Kare-Kare is so bold and the organic peanut butter does seem to really enhance the meat. Every time the meat touches your tongue, you get a nice feeling of flavor on the back. It isn’t traditional per se, but it is incredibly delicious. Between this and the Bistek Taco, I could eat Chef Eric’s food all night long. 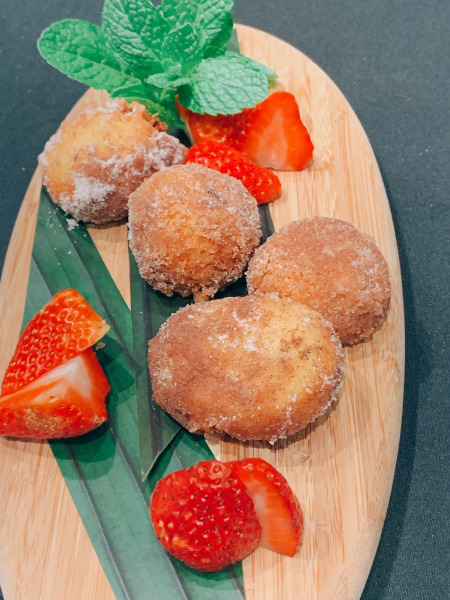 Dinner ended with a Bibingka Churro Donuts. I love all three of these things so I was not surprised that it was amazing. I’ve only had bibingka once in the past with Chef Eric and it was flawless that time as well.

The addition of a churro flavoring with cinnamon and sugar is genius. The strawberries on the side are a nice touch. The only thing I would add is maybe a dip on the side with chocolate, ube, or both. Either way still a great dish that I enjoyed.

Thus, the evening came to a filling and happy end. I asked Chef Eric to shoot a quick video with me so he could explain his background and why he does what he does. It can’t be easy to work as a pop-up chef, but Chef Eric has done this for years now and is very passionate about his craft. Hopefully he will find an audience in Berkeley that appreciates him and will support his food creations. I know I want to go back in the future for another dinner or happy hour.

If you want to check out Eats by E and the dinners by Chef Eric Pascual you can visit him online at eatsbye.com.