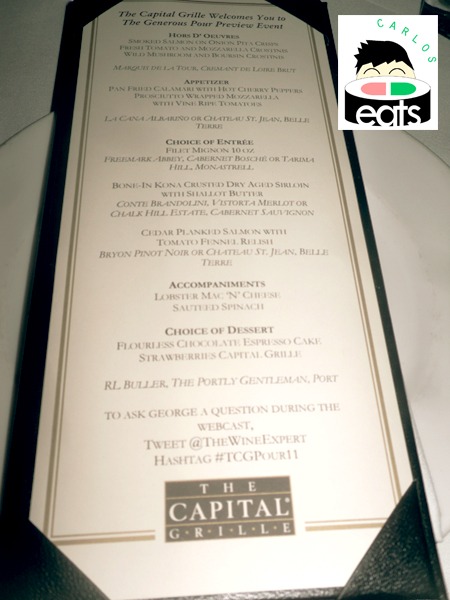 I attended the Capital Grille’s Generous Pour Preview Event on Monday night. The Generous Pour Wine Event will occur from July 12th to September 4th, 2011 at Capital Grille locations. This event will feature a collection of nine wines from around the world, each hand-selected by The Capital Grille’s Master Sommelier, George Miliotes, one of only 173 Master Sommeliers in the world. Guests can enjoy as many wines from the list as they like for only $25 per person with dinner.

The preview event occurred at Capital Grille locations around the country and was an opportunity for select media to taste the wines on the list and pair them with the dishes provided with recommendations and a live webcast from George Miliotes. Participants used the Twitter hashtag #TCGPour11 to discuss the event and could ask questions to Mr. Miliotes via his twitter username @TheWineExpert.

This post is longer than usual due to the complete menu we explored, in addition to the wine pairings we compared. Feel free to skip ahead to what interests you most. I have broken the post down by course. 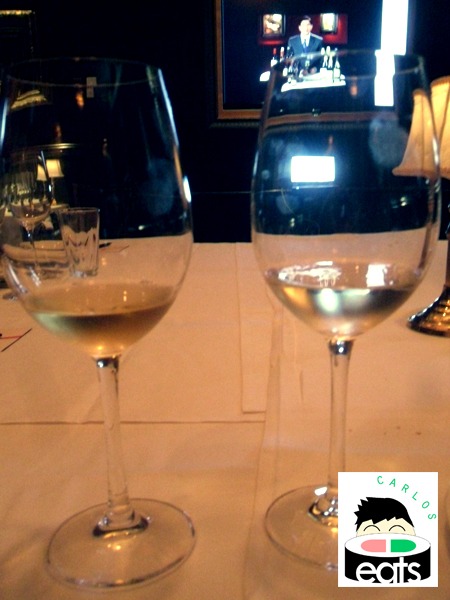 We were immediately greeted when we arrived and taken to a private room in the back for the event. The room had a single table with chairs around and a television screen where Mr. George Miliotes would soon be introducing us to the wines we would be tasting. The waitress assigned to us was great and quite knowledgeable about all the wines and dishes. She was always smiling and was a nice addition to the experience.

There were many ways Capital Grille could have executed this event and, in my opinion, they chose to make it as intimate and involved as they possibly could.  The conversations with George over Twitter were extremely interesting as he advised other media members. Originally the webcast almost felt unreal, until I checked my iPod Touch and saw the questions he was answering posting live by fellow local users in Orlando and Atlanta. He answered one of my questions in regards to a sweet red wine, but not too sweet…recommending  a sparkling Shiraz like the black chook. 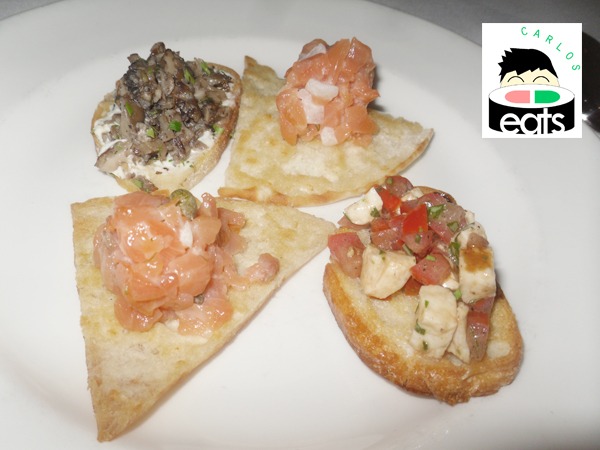 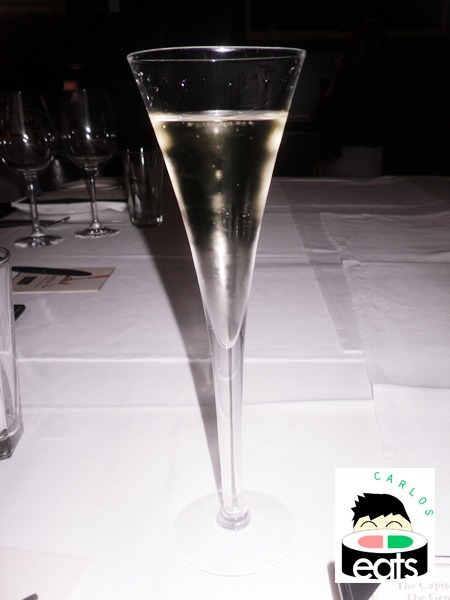 All three hors d’oeuvres were appetizing and light and the Marquis de la Tour was light and not empowering the hors d’oeuvres. The salmon was pleasant in taste and smoked just right, there was no fishy aftertaste. The wild mushrooms and boursin crostinis were tasty as well. Our personal favorite was the fresh tomato and mozzarella crostinis. They left a “WOW” factor in your mouth after each bite and complemented the sparkling white wine’s light and crisp taste perfectly. 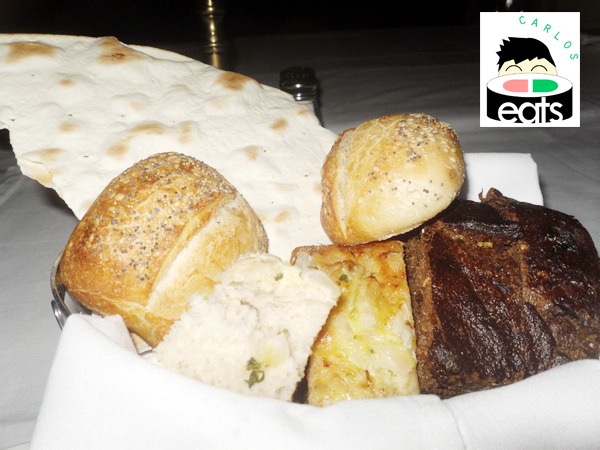 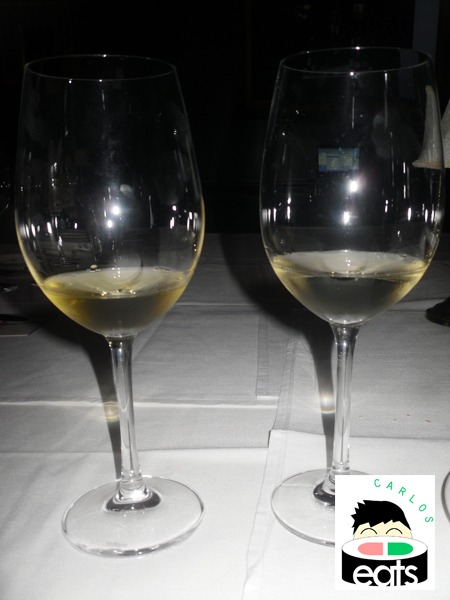 For the appetizers and entrees,  two wine pairings were suggested for each dish and Mr. Miliotes encouraged us to make our selection on whether we preferred new world or old world wines with our food. The two appetizers being provides were pan fried Calamari with hot Cherry peppers and prosciutto wrapped mozzarella with vine ripe tomatoes. The two wines being offered were La Cana Albarino or Chateau St. Jean, Belle Terre. 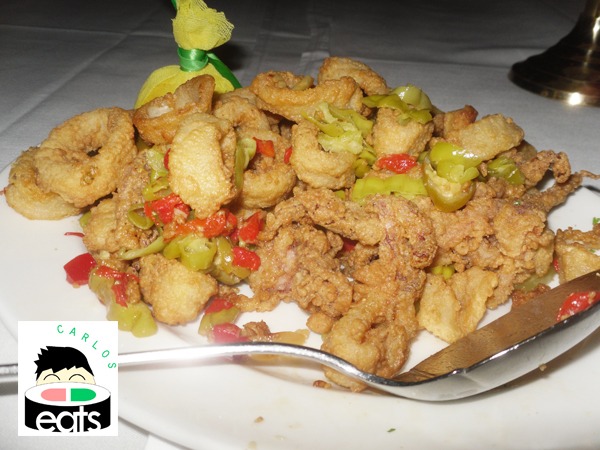 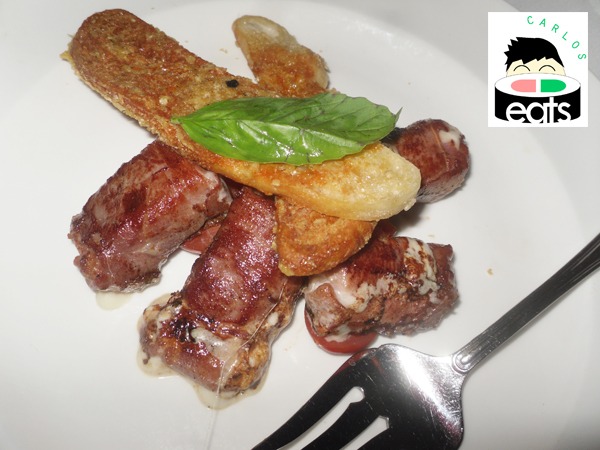 For the calamari, we chose the Chateau St. Jean, Belle Terre wine as our favorite. Although the La Cana Albarino washed it down best, we felt the Chateau St. Jean provided the best finishing touch. We chose the La Cana Albarino as our choice for the mozzarella. It had a subtle taste we really enjoyed. The calamari was excellent and full of flavor. In the past few years I have started eating calamari regularly and this one did not disappoint. The mozzarella wasn’t too heavy and still had a great texture.

Most preview events allowed the media to pick one entree, but due to a few no-shows at the Tampa location, we were able to test out the wines with all three entrees! 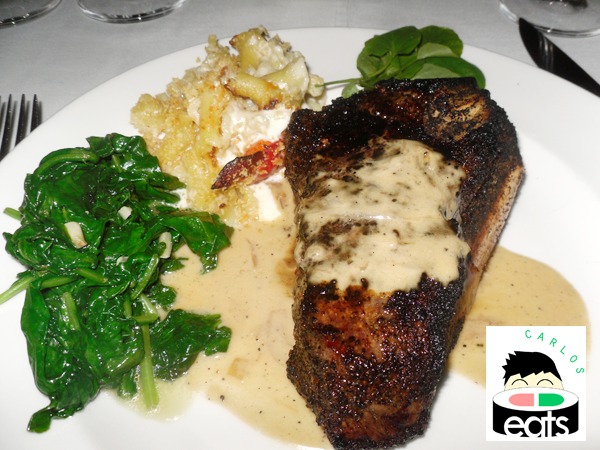 The bone-in kona crusted dry aged sirloin with shallot butter was phenomenol. Our favorite of the three entrees. It has a fantastic taste to it, the waitress noted that Capital Grille ages their steak in-house and they do it well. I ordered it medium and the deeper you went into the steak, the better it tasted. It has a smokey like taste that went fantastic with the wine we chose: The Chalk Hill Estate, Cabernet, Savignon, Sonoma, which had a volcanic chalk taste. The wine perfectly finishes the sirloin. 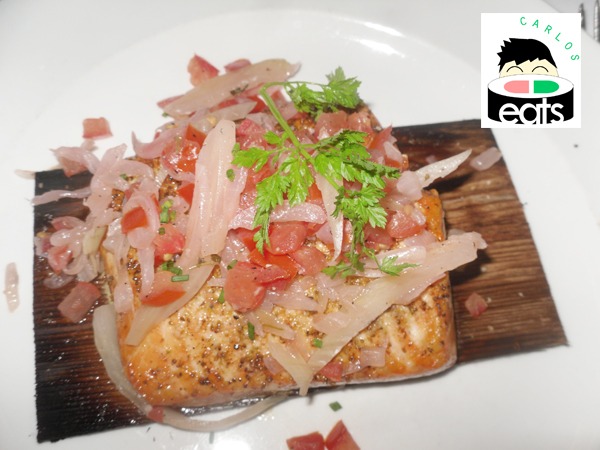 The salmon was our second favorite. Now I love sushi, but I tend to hate cooked fish. Something about it always leaves a bitter aftertaste in my mouth. However, Capital Grille’s cedar smoked salmon with tomato fennel relish left no bitter aftertaste and was filled with a savory, lemony flavoring that left me in awe. The Byron Pinot Noir, Santa Barbara, 2009 was paired with the salmon for it’s moisture and although white wines are normally paired with seafood, we found the Byron Pinot Noir to be a great addition to the salmon. 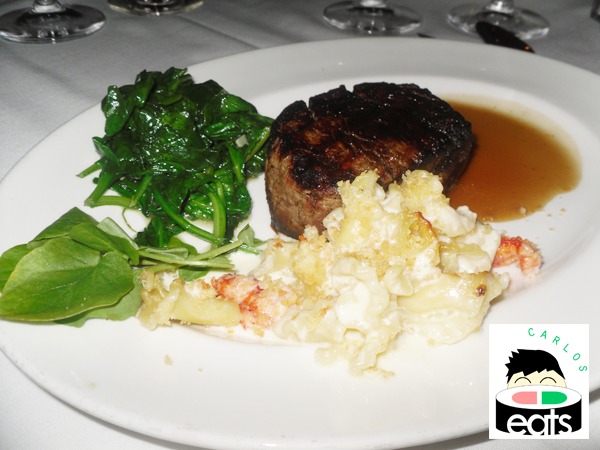 The 10 oz. filet mignon was enjoyable, but perhaps the only dish we felt we could have been replicated at another restaurant, though the wine pairing was what really made this dish awesome. We appreciated the crunchy texture to the spinach, it wasn’t soggy and flavorless. The lobster macaroni and cheese was also delightful, with large pieces of lobster present throughout.

The filet was cooked medium and our choice wine for this dish was Tarima Hill, Monastrell, Alicante, Spain, 2009. It had a subtle taste that didn’t overpower the taste. The vanilla taste was a nice final touch.  The wine is new and we were among the first people around the United States to try it. You can now enjoy it at Capital Grille locations until it becomes commercially available in August.

As if we could still manage to eat after sampling so much food…it was time to eat dessert! The two dessert choices: flourless chocolate espresso cake and strawberries Capital Grille were served with RL Buller, The Portly Gentle, which is an Australian take on classic Port dessert wine. 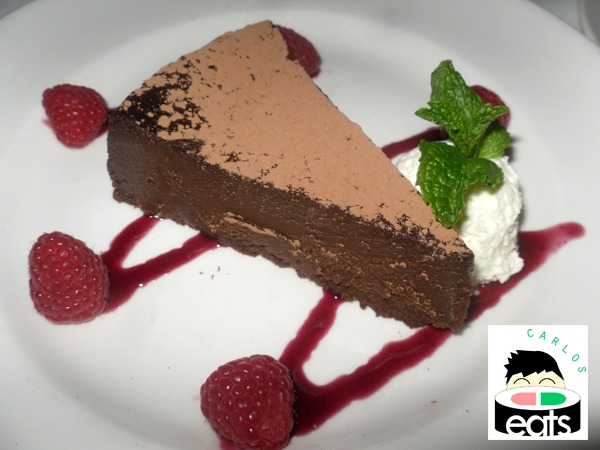 Both desserts were great with a fresh taste to the fruits. They were a nice to end to our meal and the flourless chocolate espresso cake was so good,  I attempted to finish it all despite being completely full. It was a solid dessert packed with flavor. We also feel this dessert best matched the wine pairing. 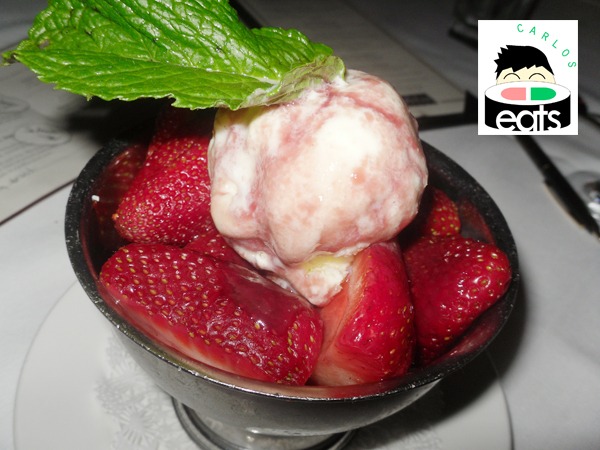 Overall, the food and hospitality at Capital Grille was great and the wine pairings were even better. When we left we were given wine bottles with gift certificates as a token of their appreciation along with with the leftovers of food that have stocked my fridge, truly a generous pour event. The $25 summer deal for these wines is great for diners and wine aficionados to fully explore their dishes.

The 9 wines featured for $25 during The Generous Pour from July 12th to September 4th are:

6 responses to “The Generous Pour Event @ The Capital Grille – #TCGPour11”