I woke up yesterday to an e-mail in my inbox from Eater alerting me that Anthony Bourdain had passed. Not a great start to my day.

The importance of Bourdain in the industry was so clear from the amount of love everyone showed him. He was one of the most famous and authentic food voices out there, never afraid to go against an industry filled with norms and filters.

Brava @asiaargento An absolutely fearless off-script nuclear bomb of a speech to a stunned crowd at #Cannes https://t.co/J8KuSWfguR

The thing I’ll remember most about Bourdain was that he always stood up for what he believed was right and that is what I hope to embrace in my life going forward. The other thing Bourdain did well was shine a light on food cultures that we not covered enough and he tried to get down to the real story in his travels. He was loved worldwide.

I’ve filmed before for television and one of the most annoying parts of filming is how unnatural it all usually is. Usually all the people there have been prepped before you visit. The dishes made to perfection. The customers arranged to be supportive loyalists.

Bourdain’s style was to try and capture an authentic experience somewhere and that is different from your typical filtered television. He will be missed but hopefully we take piece of his spirit with us and try to absorb the world around us like he did so well.

After feeling bummed for most of the morning and afternoon, I found myself in Seminole Heights and ran into Chef Viet Vo (Chef V) of Mad Chef Tampa at Brew Bus Brewing.

I was there to check out the new cocktail menu and trying to simultaneously avoid Tampa’s daily soak bath storm and Friday I-275 traffic. We were both hoping to run into the Brew Bus Executive Chef Max Sherard, but missed him and decided why not go bar hopping for a bit and catch up.

I want to say that my first impression of the new cocktail menu at Brew Bus left me with high hopes and I plan to work my way through it little by little. I enjoy both the Brew Bus and Florida Ave. craft beers which have also been made into beer cocktails in addition to their normal cocktail list.

The bartender gave me a sample of a drink he is whipping up for CL’s Margarita Wars in a few weeks for some feedback as well. That will be exciting to see in person.

Side note: Creative Loafing is running a CL Deal for Margarita Wars right now that ends in 2 days at http://cldeals.com – 50% off admission. You can thank me later when we are sipping margaritas there.

Spent the day bummed out over what happened to Bourdain and then ran into @madcheftampa @brewbusbeer and went bar hopping around Seminole Heights. Really helped. Ended up @roosterandthetill for a bit too. Felt better after. RIP Bourdain.

We went from there to Rooster & The Till which seemed like an appropriate place to be on a day of sadness for the food world. Most chefs in town will say that is their favorite place in town and it is certainly one of the most forward-thinking places.

It was obvious that the place is special place for Chef V. We were both residents of Seminole Heights in the past. He ordered the Crispy Cobia Collar which was incredible. Traditionally Vietnamese and made with a twist at Rooster.

Can I also take a minute to talk about how much I love their painting of a rooster in there? In case you haven’t heard, there is a proposal to kick the roosters out of Ybor City happening right now in the city. The Ybor Chickens Society and Ybor Chamber of Commerce are both fighting it.

I stand with the roosters. We need to preserve the history and culture of Tampa and Ybor City as we grow it as much as possible.

Sign the petition to keep our chickens protected in Ybor City: http://www.gopetition.com/petitions/keep-our-chickens-protected.html

Finally we ended our bar hop at The Refinery. I haven’t been to the new location since it moved into Fodder & Shine’s spot. I miss the rooftop and house-vibe of the original location. I have so many memories up there for my birthdays, new years, and also when they did those Pig Jams on Sundays with live bands. It was great.

I ordered my usual burger and so did Chef V. Solid after drinking food. The fries and ketchup always solid.

There was this Korean Cuban Melt (not sure of the actual menu item name) that they had in the last year or so of the old Refinery and it was killer. I am hoping they bring that back sometime.

Bulgogi and Cuban bread were just made for each other.

Once Chef V and I parted ways I headed over to St. Pete and spent the evening at Ichicoro Ane in Downtown St. Pete with some drinks and house music.

My day had turned around thanks to all the creators in Tampa Bay. 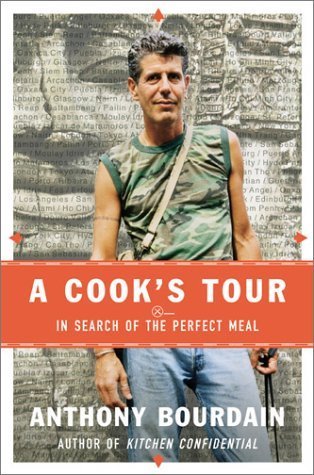 I recently re-activated my public library card. Perusing the aisles I found Anthony Bourdain’s book A Cook’s Tour: In Search of the Perfect Meal. I’ve seen it on many websites and decided to check it out. Right now I’m on the second chapter called “Back to the Beach”, Bourdains trip back to his hometown in France and finds that almost nothing remains the same of how it once was. The first chapter where Bourdain recounts a trip in Portugal was interesting. I have never known much about Portugese cuisine and his chapter on his viewing of a pig festival intrigued me. Bourdain’s writing style is very personal, I feel like he’s sitting right next to me telling me his stories as I read. The way he describes things is vivid enough so that you can visualize what he describes. I’ll post my thoughts here and there as I keep reading his book. I’ve requested his other books as well as Adam Richman’s America the Edible. Looking forward to these reads.

One quote I particularly like from Bourdain’s book so far is “Context and memory play powerful roles in all the truly great meals in one’s life”.

What makes a perfect meal? It’s something most food critics probably try to envision each time they have a meal and start writing a review. Quality service is something everyone can appreciate, but atmosphere is important too. Sometimes that whole in the wall restaurant is filled with local flavor that can’t be imitated. Memories are important too. No doubt, no place can replace the first sushi restaurant where I had my first sushi roll ever in my head. It’s a strong memory that enhances an experience the next time I visit. The people you spend your time eating with matters as well.  Is the person you are with a Debbie Downer or a good friend who you haven’t seen in years? There are so many factors to consider…

What makes the perfect meal to you?