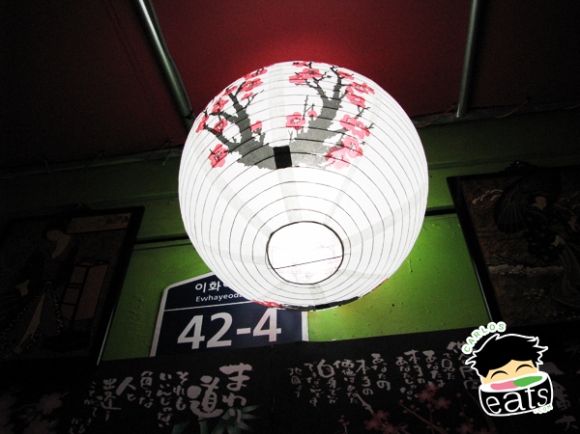 Sushi is one of my favorite things to eat in the United States. When I arrived in Seoul, I was anticipating an endless amount of sushi due to the proximity between Korea and Japan. Unfortunately, I soon found out sushi is often over-priced and the taste of fish in Korea is frequently either frozen or spoiled. There are a numerous buffets in the area, but you get what you pay for. My discouragement was remedied when I decided to stop by a small sushi stand by Ewha Women’s University one day as I walking home to Yonsei: Huku (후쿠) Sushi Take-Out. The stand is located between Bob & Dogs and not too far from the Pharaoh Nightclub and bowling alley, you’ll notice bamboo on the outside.

The sushi chef is a Korean man from Australia. His dream has always been to have his own restaurant and now he is living his dream. We had plenty of conversations about sushi and his opinion on various aspects of Japanese food culture. He told me normally people don’t converse with him during their meal, but as a sushi enthusiast I believe the smart diner (looking for the best fish) will always sit at the sushi bar and strike up a conversation with their host. 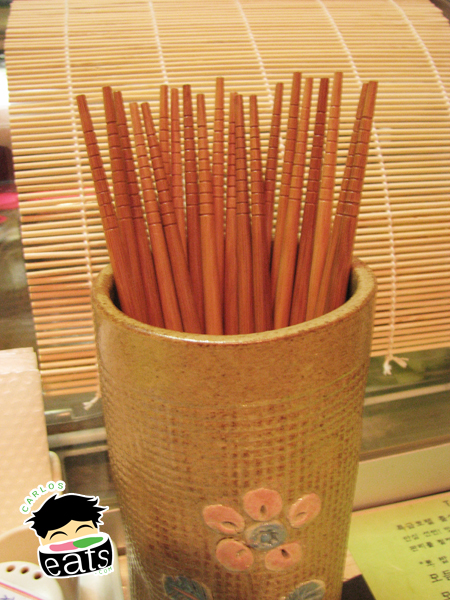 The price of the sushi has to be one of the best aspects about Huku Sushi.  The owner keeps his prices low to cater to his dominant crowd of college women in the area. You can have either 6 pieces of nigiri (full piece of fish on top of Japanese rice) for 5,500 won or 12 pieces of nigiri for 8,000 won. Also on the menu are Nori Maki (rolls) for 3,000/3,500 won and Sanuki Udon for 3,500 won. I decided to order the 12 pieces of nigiri.  As the name of the restaurant states, all orders can be made to-go and you can call in advance to place your order. If you decide to dine-in, don’t bring more than 2 friends since there are only 3 seats in the sushi booth.

These two items are sea bass (suzuki) and flatfish (hirame) and these two fish normally are not on the menu in Florida. Both were refreshing. The chef puts a small amount of wasabi between the fish and rice and you can feel it open your nostrils. The taste of the wasabi was fresh. I only slightly dipped the rice into soy sauce, enjoying the fresh flavor of the fish. I told the chef my favorite fish was salmon (sake) and he mentioned I was in luck as the salmon was really fresh today.

The salmon was amazing, I think there are very few places where it has been this flavorful. It literally melted in my mouth. An indiviual order of salmon is 1,200 won, but someday I may just go on a salmon binge and go for just salmon. The salmon brought my meal to a whole new level.

Complimentary miso soup is provided when you order a set of fish. The miso soup was light and and had an enjoyable broth that was quite different to what I am used to (either tons of tofu or tons of onion).

The vinegared shrimp was enjoyable. Sometimes shrimp can have this over-powering taste, but this shrimp went down nicely.

The cuttlefish was enjoyable and one thing I started to really notice about the nigiri was none of the fish smelled fishy. One of the ways to tell if fish is bad is to use your nose, bad fish will almost always have a strong fishy scent. The color of the fish is another good indicator and as you can see, the colors of the fish here were still vibrant.

The octopus (tako) came with a slightly spicy sauce on top that the chef notes Koreans enjoy on their fish. Although I have an aversion to some spicy foods, this fish was excellent.

The seasoned fried tofu (inori) and the egg (dashitaki) that followed were both a nice balance to the sushi assortment and brought an enjoyable balance to the meal. I hardly ever order egg at sushi restaurants in Tampa because it normally comes out all wrong, but this egg tasted closer to what I would enjoy in San Francisco restaurants (the mecca of sushi in the United States). 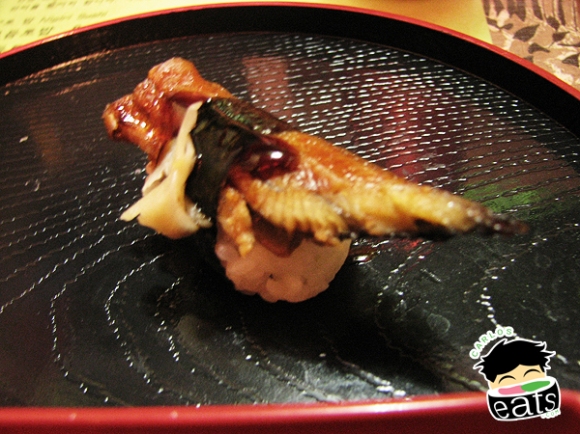 The last fish I had was the eel (unagi). Eel was one of my favorites when I lived in California, but when I moved to Florida it quickly fell off my list. The fish was either bony or drenched in sauce or smeared in cream cheese in Tampa restaurants. This eel at Huku Sushi was closer to what I would have in San Francisco and hit the spot. When you taste it, you just know the place is legitimate.

Overall, I was extremely impressed with Huku Sushi Take-Out. The owner and sushi chef was welcoming and all the food was fresh and packed with mouthwatering flavor. The prices are perfect for college students and for anyone trying to dine on a budget and with take-out orders you just cannot help but consider this place to be one of the hidden foodie finds in Edae. Ewha and Yonsei University students should put this restaurant on their to-do list. I know I’ll be back.