Many food bloggers in South Korea report an increasing interest in Mexican food throughout the nation as many local chains begin to pop up around Seoul. It certainly makes sense for a popular franchise, such as Taco Bell, to expand into the country. However, Taco Bell previously failed to expand into South Korea with 2 locations in the 90s and closed down in China back in 2008. The change in interest in foreign foods and increase in foreigners visiting South Korea may also play a factor, in addition to the powerful marketing today with the use of the internet and blogs to make food trends.

Taco Bell suffered serious losses in the United States after it was falsely sued in January for only having 35% meat (the lawsuit was later dropped) though international locations did better financially. The move to Seoul is a big step with only 250 locations out of the United States as of September 2010. The price of Mexican food can be pricey in South Korea and a cheap resource like Taco Bell is certainly welcome by me. Also: Taco Bell is perhaps the only fast food chain in Korea that offers free refills on soft drinks. There are only 3 Taco Bell locations currently open in Itaewon (이태원), Hongdae (홍대), and Sindorim (신도림). The next location will have its grand opening this Friday, September 16th, in Sinchon (신촌동) by UPLEX  just a short distance from Yonsei University and Ewha University. 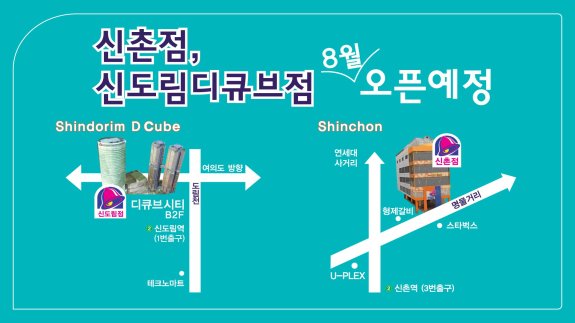